Other Animations - Transition Between Responsive Sizes

Responsive banners are designs that adapt to any aspect ratio. This makes them perfect for full screen advertisements, expandable designs, wallpapers and Digital Signage. An example of a responsive design can be seen in the GIF below.

If the resolution of a responsive design changes while the design is in view, the images and text on the design re-size and re-position to fit the new resolution.

When a design is being re-sized, you can control the speed the elements re-size at using the 'Transition Between Sizes' option under the Other Tab in the Animation Panel in Flexitive. 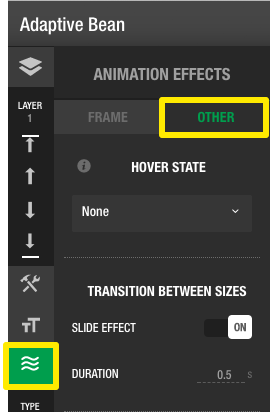